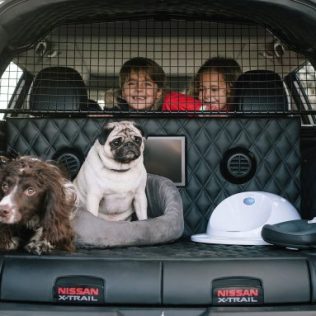 > Blog > Did You Know About Nissan’s Dog Car?

Did You Know About Nissan’s Dog Car?

A Look At The Nissan X-Trail 4Dogs Concept

As a general rule, car makers want to make every vehicle they produce as appealing as possible to everyone no matter their needs. Now heavy duty trucks come with luxury interiors so families in the suburbs who will never even use the bed can justify the purchase. Off-road vehicles like Jeeps and Subarus now spot urban centres just as much as Mercedes or Lincolns.

Nissan has taken a different route, they are making vehicles that would appeal to small niche markets. We have already talked about how Nissan partnered with Star Wars for the Nissan Rogue; Rogue One Edition, A beautiful version of the Rogue One that comes with a stormtrooper helmet and a few different decals here and there.

Car brands pairing with the entertainment industry is nothing new, even in the seventies, Ford released a Starsky and Hutch edition, Gran Torino. Although these special edition cars rarely change anything about the actual car other than a few decals and inlay Nissan has decided to take it a step further.

Currently, in its concept stages, Nissan has released a video of its concept for the Nissan X-Trail 4Dogs. The X-Trail is the European version of our Rogue but the 4Dogs is exactly what it sounds like. Nissan plans on releasing a vehicle specifically for dog owners.

At first, it didn’t seem to make much sense but after reading online about how excited people are for a compact SUV that caters exclusively to man’s best friend I am starting to think this a really good idea. If you are going to build a car exclusively for a niche market you may as well make it the largest niche market. Surely, more people love their dogs than a Halo Edition Ford Pickup.

The New X-Trail looks like every other X-Trail on the road but the inside is a puppy paradise offering a divider between the back, where the dogs will be and the passengers. There is also a built in treat dispenser and “spill-proof” water bowl. The folks at Nissan seem to have thought of everything including a slide-out ramp to help your pooch get in and out and perhaps the coolest yet least practical feature, a dog wash station with built in dryer vents in the back.

The Final and possibly best feature of the Nissan X-Trail is the video feed that shows the driver’s face to the dogs in the back so they do not feel scared.
Obviously, this is still in the concept phase but it looks like something Nissan wants to go ahead with. Is this something the average dog owner would be interested in? Every dog owner I have talked to seems to think so but the price is also a big factor, including a dog wash station and video monitor wouldn’t be cheap, but can you really put a price on your furry friend’s comfort.