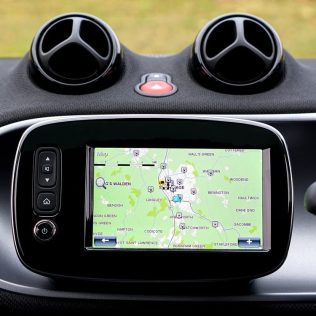 Advantage Car Rentals > Blog > Should you tick for GPS navigation next time you rent a car or truck?

Should you tick for GPS navigation next time you rent a car or truck?

When they were introduced, navigation systems were a fancy, expensive feature reserved for luxury, high-end cars. Though now it is common to see this feature even in the most basic models. Even if the car model does not come fitted with one, it is easy to buy a standalone navigation system for cars.

Understanding what is a navigation system

The terms GPS and Sat Nav are often used interchangeably when talking about navigation systems. However, there is a difference between them. GPS (Global Positioning System) refers to a group of about 30 satellites placed around our planet Earth. This system of satellites is owned by the United States government and operated by the United States Space Force, however it has been made publicly available. This network of satellites sends signals to GPS receivers on ground to pinpoint their location, which is provided as coordinates. Satellite navigation software, or Sat nav, prepares a map/route to your destination by combining the coordinates from the GPS signal with a comprehensive map. Some popular brands using GPS and sat nav are TomTom and Garmin.

Is it worth paying extra for a navigation system in rentals?

Whatever car model may you book as a rental, almost all rental companies give you an option to include a navigation system. Despite their wide-spread use, people often wonder whether it is worth paying extra for a navigation system in a car. Especially as people can access GPS navigation and maps via different apps on their phones or other smart devices. If you are renting a car it usually means you do not regularly drive so might be unfamiliar with some routes and/or you are planning a road trip, which means driving in a new, relatively unknown area. Especially if you are going on a long-distance drive or a camping trip, having a reliable navigation system would be very helpful. Some benefits of using a standalone navigation system:

Once you select the right model for you, it is still very important to use it right to get the best results. Here are a few things to keep in mind while using navigation systems: