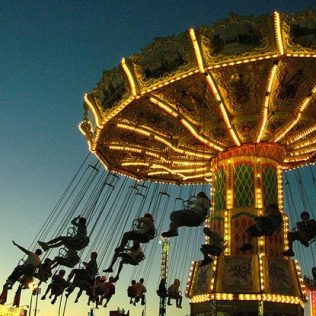 Adventures In The GTA This August!

Can you believe it? August is almost here! Canada’s precious few summer months are already almost over and done with, it won’t be long before the kids are back in school and the leaves start to change. Alas, with the end upon us and one glorious final summer month ahead we should not dwell on the weekends lost to rain, bugs and chilly temperatures but look forward at August with hope that the rain will stay at a minimum and that we may actually get to leave the house with bringing a jacket just in case.

August in Toronto is truly one of the best times to be out and exploring the city with, hopefully, beautiful weather and a constant stream of parties and events, August in Toronto is spectacular and it can only be made better with Advantage Car and Truck Rentals. Below is a list of our favourite August activities happening in and around the Toronto Area that is easily accessible with your car rental.

The CNE is a fantastic way to spend a day with the family and friends just load everyone up into your rental car and head to the Exhibition center, located in Downtown Toronto on the shores of Lake Ontario it may be the only place in the entire downtown area with lots of places to park your car rental.

The CNE is often misunderstood as a state fair in Toronto, but it is so much more than that. While you certainly can go on rides, eat strange foods you almost certainly never had before (Deep Fried Coca Cola?). But there is more to it than that, including an innovator’s pitch competition where Canada’s brightest young minds compete to win $25,000 for their innovations in various fields of study. The numerous other events happening at the CNE include a talent competition, a garden competition as well as baseball tournaments.

A trip to the CNE would never be complete without trying some wacky food that almost certainly will not be good for you. While they do not let out a list of the crazy foods beforehand, past standouts include a deep fried bacon grilled cheese and a hotdog inside a pickle then deep fried.

Parking this year is somewhat limited due to construction but there are still plenty of options around the Exhibition Center including two parking lots within walking distance. A quick heads up, a majority of the traffic comes from the West End so those lot’s fill up first. Try coming from the east for a better chance of getting a close spot.

Taste Of The Danforth

One of Canada’s largest street festivals with an average of 1.25 million attendees over 3 days takes place from August 11th to the 13th. This Greek festival takes place in one of Toronto’s most diverse neighbourhoods and has a lot to offer from the very best authentic Greek food to stunt shows based on the upcoming movie Kingsman and the Golden Circle. During Taste of The Danforth, you can look forward to incredible food such as gyros, stuffed grape leaves and much more on the tasting menu which only costs six dollars! Although the food is only the half of it.

You can enter to win multiple trips to Greece, St. Lucia and even Jamaica, The celebrity stage features celebrities from all over the globe including Arlene Paculan, the Miss and Mr Asia Canada competition and The Commoners.

Most exciting of all may be the Hollywood on the Danforth segment of the weekend which is dedicated to upcoming movies from 20th Century Fox. This year includes Kingsman and The Golden Circle and Murder On The Orient Express. Kingsman is even bringing a stunt show which takes place multiple times on Sunday.

Catch A Game In Toronto

Toronto has a whole host of winning teams, and right now three of them are in the full swing of their seasons. The Toronto Blue Jays, one of Toronto’s Big 3 teams is having a bit of an up and down season but the passion is still there and the thrill of being in the stadium as Bautista hits a home run over the back wall cannot be matched. Tickets range in price depending on how close to the action you want to sit. Parking is also abundant, if you’re worried about finding a spot to park your rental car at the Rogers Centre you will be pleased to hear that not only is their parking everywhere but there are attendants with flags that will point you in the right direction directly to a spot!

It is not just baseball this time of year, the Toronto FC soccer team is leading the Eastern Conference of the MLS and the fans are going crazy! There has never been a better time than right now to go and see a professional soccer game right in your home city. The open air stadium makes it the perfect destination on warm August nights.

Let’s not forget the Toronto Argonauts, one of Canada’s winningest teams in the past, the Argos have made a lot of changes over the past few seasons including moving from the Rogers Center to the BMO Field were the Toronto FC play. They made the change for a few reason but the most important of all, in the fans eyes anyway is because Canadian Football is meant to be played outside. There’s nothing better than watching a football game when it is -30 outside and snowing, but that’s not for everyone so it is better to catch a game now while it is still warm out.

These are our suggestions for a great way to get out and about this August but there’s so much more that can be done with your Toronto Car Rental. No matter what you have planned this summer Advantage Car and Truck Rentals has the perfect rental for you.