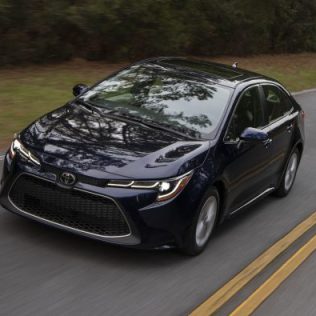 45 million. That’s how many Toyota Corollas have been sold around the world since their introduction in 1966. The name may have remained the same but the Corolla has seen huge transformation over the years. For the last few decades, the Toyota Corolla has become synonymous with affordable, dependable commuter motoring.

But with the new Honda Civic, new 2020 Nissan Sentra, Hyundai Elantra and striking Mazda 3, the Corolla is up against competition the likes of which it has not seen before. Is the new 2020 Toyota Corolla ready to fend off the new challenge? More importantly, does it have what it takes to survive the tough competition from the compact crossover market?

Book a rental car on our app

In a word that’s what the 2020 Corolla is – a good car. Not a great car but nothing that will offend the everyday motorist. Like modern Corollas before it, the 2020 model remains firmly in the ‘adequate’ category when it comes to ride and handling. There are no sporting pretensions to be found – and that begins with an economical engine.

With a 139 hp, the engine screams incremental upgrade – it screams too when you are preparing for a merge onto a busy highway. It’s basically the same 1.8 litre four cylinder unit found in the last Corolla, paired to an elasticky CVT transmission. Go with the larger 2.0 litre motor available higher up in the model range and performance is notably more brisk. Though we wouldn’t recommend it over the hybrid.

Book a rental car from Advantage and discover what it’s like to live with a car in an extended ‘test drive’.

The front-end has hints of the new Prius and body itself tries to conceal a three-box design in a more coupe like shape. It’s generally a mature shape, one that we expect will age gracefully. Is it exciting? No, but it does enough to look contemporary (and firmly puts the Hyundai Elantra in the shade).

Previous generation base Corolla’s have been sparser than a barn, but with this new iteration, there is a lot more safety kit that comes as standard. Active lane departure warning and assist, auto high beam, pedestrian collision detection and radar cruise control come as standard on even the base automatic car. Apple CarPlay is standard across all variants too (though Android Auto is still missing!).

The 2020 Corolla continues the tradition of being about average when it comes to cabin space. Front passengers are sufficiently far apart from each other to avoid bumping elbows and rear passengers will have little to complain about with legroom. That said, this is not the most spacious cabin in its class by stretch. The (slightly) sloping roofline can also mean tighter headroom for rear passengers too.

Driving greener with rental cars | Kia Soul: Can it do it all?

Should I get the hybrid Corolla 2020?

Now that’s where the new Corolla shines. The Hybrid Synergy Drive system is almost a straight carryover from the Prius. Yes, the system is all about fuel economy – 4.4 l/100 km in the city – but it really transforms the driving feel. The electric motor eliminates the slow response of the CVT, making the Corolla peppy to drive in stop-go traffic. And with the millions of kilometres of real world testing Toyota’s got behind the system, it is extremely smooth and reliable.

The new Corolla remains as ever a compelling buy for the brain, not the heart. But once you figure in the price, and how highly insurance companies rate Toyota’s reliability and safety, it really does start to make sense. Like its competition, the 2020 Toyota Corolla starts at $20,790 for the base automatic.  The hybrid model starts at $24,790 – and that’s the one we’d recommend. It is quieter, more refined, more fun to drive and totally worth the premium.

A short test drive from the dealer hardly tells you what the car is like to live with. For a longer ‘test drive’ hire a rental car from Advantage Car Rental. Our fleet includes the Honda Civic and similar cars meaning you can try out a few different cars to get a feel for them. Best of all, we have 2019 and 2020 models so it’ll be a like-for-like comparison too.