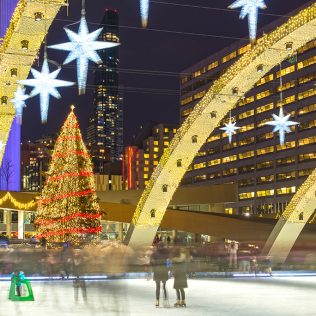 Amazing Things To Do In Toronto This November

Amazing Toronto Adventures On A Budget

Halloween is over and a trip to any major retailer will remind you that Christmas is just around the corner. It’s now time for the Winter Activities to begin! According to the trusty Farmers Almanac, we are in for a cold November with lots of snow headed our way. It’s time to hang up the scary costumes and break out the parkas because winter is headed to Toronto!

The Royal Agricultural Winter Fair, or Royal Fair for short, is a Toronto staple. The Fair started in 1922 following World War 1 when a farmer named W.A. Dryden from Brooklin, Ontario wanted to start a fair the would be the gold standard for judging domestic animals. I can only imagine how long it would take to get from Brooklin, which is just outside Whitby, all the way to the Exhibition Centre in Toronto in the 1920’s

Since then, the fair has grown into a week-long event, including riding competitions, concerts, food and lifestyle demonstrations from our nation’s greatest chefs and lifestyle gurus.

This year,  The Fair will be celebrating 150 years of Canadian Innovation in honor of Canada’s 150th birthday. This will include incredible looks through Canadian history featuring the beginnings of every Canadian’s favourite spice company, Club House, all the way back in the 1800’s

The Santa Clause Parade has been a Toronto tradition for over 100 years. When the parade started in 1905, there was just a single float! The float was sponsored by The Eatons department store and picked up Santa at Union Station and dropped him off at the Eatons Store. Over the years the parade has changed quite a bit, including the main sponsor, Eatons, dropping out, but some things never change Santa is always there to spread the spirit of the holidays!

The parade starts at 12:30 at Bathurst and Bloor and travels all the way to the St Lawrence Market near Wellington and Front. We highly recommend getting there nice and early in order to get a good spot near the front, especially if you have young or short children. It may seem like such a long route would allow for a lot of space but last year over half a million people came out to the parade and they take up a lot of space!

The Cavalcade of Lights

This will be the last Christmas related item on the list I promise, but I would be remiss if I didn’t talk about one of the best activities Toronto has to offer! The Toronto Cavalcade of lights is another Toronto tradition where, in addition to fireworks and incredible musical performances, Toronto lights the Christmas tree at Nathan Phillips Square!

Even if you do not celebrate Christmas, this ceremony has plenty to offer! The fireworks display is truly a sight to see as they explode all around city hall and the ice skating party is made even better by the live DJ playing great music to get you in the mood to party!

The OnOfAKind Show and Sale

This is one of the most exciting exhibitions to come through Toronto. You can find completely one of a kind creation from artists and makers all over Canada! Do you want a new handcrafted quilt for the back of your couch? Or a new Dancing Drake mug to show off at the office? You can find all these incredible creations and so much more at the OneOfAKind Show.

The Show has all sorts of cool stuff to check out like a Walk of Fame for past Makers, a fashion show to display all the cool handcrafted clothing you can buy and of course live artist demonstrations as they work their craft right in front of your eyes!