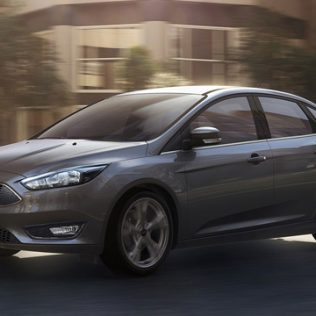 The Ford Focus has been a favourite of ours at Advantage Car and Truck Rentals for a very long time. They are reliable, provide a modest amount of room considering their size and depending on the production year, are generally good looking cars. Ford specifically designs the Focus to be fuel efficient and inexpensive because even if they lose money selling them they make it up by selling their more expensive less efficient cars.

This review focuses on the sedan model of the 2017 Ford Focus even though most reviews look at the hatchback models like the SE or the super powerful RS which is basically a street-legal rally car.  We rent out the sedan because it is the most practical of the different body styles.

The outside of the Ford Focus is fairly standard, four doors and a trunk but the front end is truly something different. Ford really did focus on the hatchback version and since they had to tie the cars together by something other than name, the front ends are identical. This is a great look for Fords, they have always been great at making sporty looking vehicles even if the Focus is more suited for the carpool lane than the race track.

This is a car built for young professionals, its look is designed to fit in anywhere, tradesmen and business folks alike would fit perfectly with this car.

The inside of the Focus is very similar to the rest of Ford’s sedan lineup like the Fusion or the Taurus. But as the old saying goes, If It Isn’t Broke Don’t Fix It. Everything from the radio and climate controls to the layout of the gauge cluster is perfect across the board. Even the strange rounded rhombus shape of the gear shifter fits perfectly in the driver’s hand.

The rear seats are comfortable but on the smaller side because of the size of the car but what it lacks in rear legroom it more than makes up for in trunk space, with 13.2 cubic feet a family of four could fit their weekend luggage with no problem.

The Ford Focus is the King of fuel efficiency, after driving one for a week I was surprised at how little gas I was using, while the fuel tank itself isn’t very big, it doesn’t need to be. The 2017 Focus gets 29 Miles Per Gallon City/Highway combined. That’s 26 MPG City and 36 MPG Highway so either way, you won’t be making many stops for gas and when you do it won’t be breaking the bank.

The car sits low to the ground so if you are used to larger vehicles it does seem a little strange that even when you’re going the speed limit it feels like you’re going way faster. We promise you will have a blast with the Ford Focus even if you are just using it to get to work.

Why Rent The Ford Focus From Advantage Car And Truck Rentals?

People rent cars and trucks for any number of reason, some are going on vacation, some are moving and some just need and a reliable and inexpensive way to get to work while their car is in the shop. The 2017 Ford Focus is made for the third group, it will get you to work have enough space for the kids in the back and groceries in the trunk.