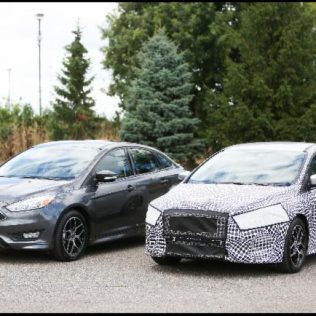 What Is Car Camouflage?

Did You Know About Car Camouflage?

Anyone who has googled a car before has no doubt run across pictures of said car covered in a strange black and white wrap like these;

Have you ever wondered what all that is about? A new paint option to to make finding your car easier? No, Promotional pictures? No, It is actually used to make photographing the finer details of the car almost impossible until the day they are ready to be launched at the next big auto show.

All the shapes and shadows are specifically designed by the impossibly cool named “Camouflage Coordinator” to make the pictures turn out blurry and trick the human eye into not being able to see certain design elements of the car. Sure, the general shape of the car looks the same but everything else down to seams and vent placement can be hidden from “Car Spies”.

Car Spies can get paid anywhere from $300 to $10,000 for a picture especially if it’s an exclusive they are sure no one else will have. Some going as far as to crawl under the cars to measure parts to see what other models they match.
In order to keep all of their secrets secret companies like Ford and GM have been disguising their test cars for decades, starting in the 60’s with giant panels they would add to the car to change the look, unfortunately that added weight and noise that would impede on the test being conducted. Now, Camo Coordinators spend their days making vinyl wraps to conceal the fine details while not adding weight or noise.

Kapuskasing, Ontario is the testing ground for a few auto makers to examine how well their cars do in rough winter terrain, so the next time your up north keep an eye out for the craziest paint job you’ll ever see.