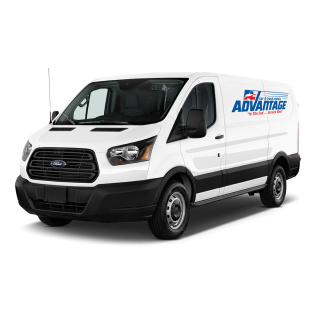 New Year, New You, are you moving in 2017? If so we have the perfect vehicle for you, A Ford Transit from Advantage Car and Truck Rentals is perfect for moving especially if you are moving from an area with not a lot of room to park large trucks.

Admittedly, there is not much to say about the exterior of a Ford Transit. It is a large white van with panels down the side and rear windows. The rear windows are handy because a lot of panel vans do not have rear windows and driving around any city or highway you certainly want to be able to see what is behind you. There is only a rear door on the passenger side and it is massive, so if you are parked at a curb so can still put large items in the back without impeding traffic. The very rear door opens completely so there is nothing in the way when it is being loaded.

For a utility vehicle, The Ford Transit is surprisingly comfortable and that has everything to do with the two captains chairs in the front they are tall, wide and cushioned like a cloud. Just because you have a day of moving ahead doesn’t mean you should have to suffer while you drive, there will be plenty of time to suffer trying to get the couch up stairs. The rear cargo area is absolutely massive, Ford’s slogan for the Transit is “Because 1 Trip Is Better Than 2” and it is probably the most truthful statement a an automaker has ever made.

Like most people I was fairly intimidated to drive a Ford Transit for the first time, considering there is no windows to check blind spots and I was driving through the Toronto Financial District at lunch time so there was a lot of people walking around and bike messengers wizzing around. All my worries were squashed the second I hit the road, the mirrors are large enough that you have full visibility around the van so you always know where everything is in your surroundings.

22 combined miles per gallon which is not all that bad considering its size and purpose.

Why Rent A Ford Transit From Advantage?

Simply because you have to, nobody will be renting the Ford Transit for a weekend get away or to get to work for the week. People rent Ford Transits because they have something to move or are moving homes, that is what it was built for and it does its job very well.